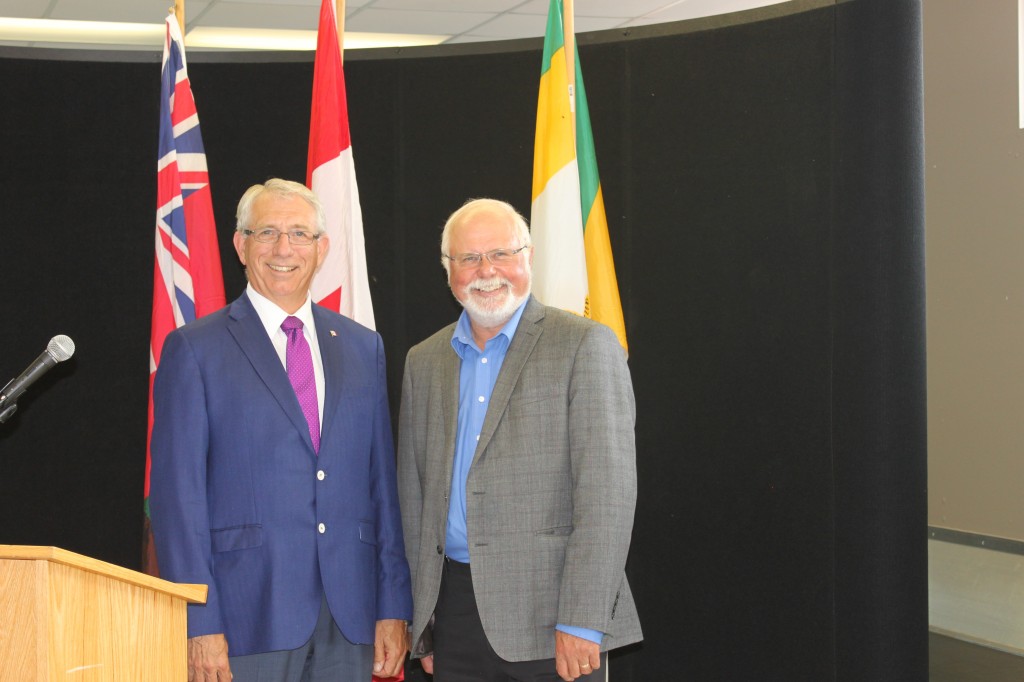 Brandon, Manitoba—Robert Sopuck, Member of Parliament joined Larry Maguire, Member of Parliament for Brandon—Souris, Greg Selinger, Premier of Manitoba, and Shari Decter Hirst, Mayor of Brandon, to announce that the Government of Canada has conditionally set aside up to $2.9 million for the Brandon Municipal Airport Passenger Terminal Redevelopment project, the second eligible project in Manitoba under the New Building Canada Fund.

“Modernizing Brandon Airport is key to having more flights to our region and more airlines utilizing the facility; opening up business and tourism opportunities for Western Manitobans,” said Sopuck. “The Parkland region and all of my constituents will benefit from this development of the airport which will bring more tourists to our beautiful part of the country.”

The project involves renovating and expanding the existing terminal to improve passenger flow and accommodate future growth needs. It will also enhance safety and security for passengers and employees alike by increasing traveller and baggage capacities in processing and secure areas. Additionally, the project will help improve the airport’s information technology infrastructure by installing fibre broadband to allow for fast and reliable broadband connectivity.

“Our Government’s support for public infrastructure has never been stronger. We are pleased to work with the City of Brandon and the Province of Manitoba to approve projects under the New Building Canada Plan, to ensure that infrastructure funding continues to flow in Manitoba as we focus on creating jobs, promoting growth, and building strong, prosperous communities across Canada. We are proud to invest in the Brandon Municipal Airport Passenger Terminal Redevelopment project, which will focus on efficient and modern amenities for travellers in the southwest region of Manitoba.” Larry Maguire, Member of Parliament for Brandon-Souris.

The New Building Canada Plan is the largest and longest federal infrastructure plan in Canada’s history. This unprecedented commitment will provide $53 billion over the next decade to support provincial, territorial and municipal infrastructure.

Over the next ten years, Manitoba will benefit from approximately $1.2 billion in dedicated federal funding, including almost $467 million under the New Building Canada Fund.

“Expansion of our Municipal Airport is truly the lynchpin in terms of creating a regional hub for passenger air travel in southwestern Manitoba. We are a growing, thriving, modern community and, soon, we will have an airport that reflects that and also positions us well for continued growth and prosperity.” Shari Decter Hirst, Mayor of Brandon

• The Government of Canada is conditionally setting aside up to one-third of eligible costs, to a maximum of $2,906,200 for this project under the New Building Canada Fund’s Provincial-Territorial Infrastructure Component-National and Regional Projects. This funding is conditional on the project meeting applicable federal eligibility requirements with respect to the New Building Canada Fund and the signing of a contribution agreement.
• The Government of Manitoba will provide one-third of eligible costs up $2,906,200.
• The City of Brandon will provide the remaining one-third of eligible costs (as well as any ineligible costs and costs overruns), for a contribution of $2,981,200. The total estimated cost for this project is $8,793,600.
• The $53 billion New Building Canada Plan provides stable funding for a 10-year period, and includes:
o The Community Improvement Fund, consisting of the Gas Tax Fund and the incremental Goods and Services Tax Rebate for Municipalities, which will provide over $32 billion to municipalities for projects such as roads, public transit and recreational facilities, and other community infrastructure.
o The $14-billion New Building Canada Fund, which consists of:
 The $4-billion National Infrastructure Component that will support projects of national significance; and
 The $10-billion Provincial-Territorial Infrastructure Component for projects of national, regional and local significance. Of this amount, $1 billion for projects in communities with fewer than 100,000 residents through the Small Communities Fund.
o An additional $1.25 billion in funding for the Public-Private Partnerships (P3) Canada Fund administered by PPP Canada.
o $6 billion in funding continues to flow across the country this year and beyond under existing infrastructure programs.

To learn more about the Government of Canada’s focus on jobs and the economy consult Canada’s Economic Action Plan at http://www.eap.gc.ca.

For more information or to schedule an interview with Robert Sopuck, MP please call:
613-992-3176