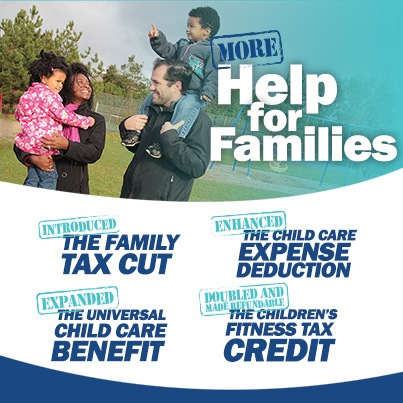 “Our Government is focused on helping hard-working Canadian families make ends meet, by making important priorities like child care and after-school sports more affordable,” Sopuck said. “Under this plan, every family with children will have more money in their pockets, to spend on their priorities as a family.”

Families can claim the Family Tax Cut in the spring of 2015 when they file their 2014 tax returns. They will begin to receive payments under the enhanced UCCB in July 2015. The July UCCB payment will include up to six months of benefits to cover the period from January through June 2015. The enhanced UCCB will replace the existing Child Tax Credit for the 2015 and subsequent taxation years.

“Over 160 taxes have been cut or eliminated since we came to office in 2006, and this latest tax cut continues our record of standing up for Canadian families by lowering their taxes,” Sopuck said. “The Liberals and New Democrats have already declared their opposition to lowering taxes for families, which is disappointing but not surprising.”

Two thirds of this latest tax reduction will benefit low- and middle-income families.

“Our Government has worked responsibly to balance our budget while keeping taxes low,” said Sopuck. “Now we are in a position to help Canadian families balance their budgets too.”

Quick Facts
• All families with children will benefit from the new measures introduced by our Government. The average tax relief and benefits for these families will be $1,140 in 2015.
• Low and middle-income families will receive two-thirds of the overall benefits provided by the package.
• The Family Tax Cut will eliminate or significantly reduce the difference in the federal tax payable by a one-earner couple relative to a two-earner couple with a similar family income.
• Earlier this month, the Government announced its intention to double the Children’s Fitness Tax Credit and make it refundable. The maximum amount of expenses that may be claimed under the credit will be doubled from its current limit to $1,000 for the 2014 tax year and subsequent tax years, and the credit will be made refundable effective for the 2015 and subsequent tax years.
• Canadians at all income levels are benefiting from federal tax relief measures introduced since 2006, with low and middle-income Canadians receiving proportionately greater relief.
• Previous tax-relief measures introduced by the Government since 2006 have resulted in a tax reduction of approximately $3,400 in 2014 for an average two-earner family with two children.